For two years, the scandal over whether Donald Trump and his campagin colluded with Russia has dominated Washington D.C. and the American establishment media circuit.

The results of the investigation are in - no collusion.

I cannot overstate how important this story is. But not for the reason the mainstream media would tell you.cc

When Hillary Clinton lost her election, her team gathered together to try to come up with some excuse as to why they lost - to cover up the shame and embarassment of pathetically loosing to the bafoon, idiotic, bigoted, hateful clown that is Donald Trump.

They decided to hatch the idea that Trump won because the Russians had interfered with the 2016 election, and that the Trump campaign had colluded with them to engineer that win. They sent the story out into the political world, and used their connections in the media to push it relentlessly.

The establishment Democratic Party - the establishment being many of the current/former elected officials, donors, media pundits, etc, not the ordinary voters - were all to keen to run with the story, and keep it the number one issue in US politics. They too were insanely bitter at their defeat to Trump. They stoked this conspiracy theory, and the Democratic-friendly media, namely MSNBC, led on this front by the once reputable Rachel Maddow, spearheaded it.

And other major parts of the media carried it, too. Partly because of their lust for chasing sensationalist stories, and partly because of the idiotic group think of American news and politics, the rest of the non-Fox News media swore up and down this collusion was 'obviously' a reality, and that it demanded constant air time.

This was all despite either multiple extremely important pieces of evidence that strongly suggested that Trump didn't collude with Russia routinely appearing, or a distinct lack of evidence to credibly suggest that he did. Every month it seemed, often more than, you had some "Breaking - the Trump Administration is on its last legs." or "This is it - this is the smokin gun with Russia and Trump" again and again. They almost all had to be walked back or explained eventually as innacurate. The degree and tonnage of journalistic malpractice was stunning.

Such was the weight however of the story already by even just Trump's innauguration, a law enforcement and counter intelligence operation was opened in May 2017 by the Deputy Atorney General, to investigate whether collusion took place. The man appointed to head it up was former head of the FBI (and himself a Republican) Robert Mueller. His new title of Special Counsel was on the lips of nearly every pundit from D.C. to NY, as he investigated the scandal. And, as stated, the results are in:

Special Counsel Mueller handed in his report, finally and with little warning, to the Justice Department on Friday. It was then up to the Attorney General if the report would be released to the public, and a summary of it now has been. Mueller is clear in his report - there was no collusion between the Trump Campaign and Russia to fix the 2016 election.

There was a second objective to the investigation by Mueller and his team, however: whether President Trump committed obstruction of justice in trying to interfere with the investigation. To this, Mueller was less clear in his report, indeed with the Deputy Attorney General, who was in charge over Mueller of overseeing the investigation for the Justice Department, saying that on the issue of whether the president committed obstruction of justice, Mueller's report doesn't suggest he did it, but “it also does not exonerate him” either.

That is indeed a matter for further investigation, and it seems to my laymen eyes that there is serious cause to think he's guilty of that. But again, it needs full and proper investigation.

But Mueller says he's crystal clear on the collusion story.

Let's also be clear that the Trump Administration and its crony associates are not clean and crime free, in other regards. Through the course of the Mueller investigation, dozens of criminal indictments have been issued for offenses that the Special Counsell happened to uncover whilst investigating, but weren't directly related to, Russian collusion. Things like tax fraud, failure to register as a lobbyist, campaign finance law fracture, lying to Congress, etc are the types of charges Trump's people are facing.

Six of these indictments were for former Trump aides or officials, and dozens for Russian nationals. Several of Trumps former top advisors, employees, lawyers and friends are now or are about to serve jail time, thanks to this investigation. But they are all side issues.

An important reflector of who Trump and his brand of top followers and employees are, but smallfry compared collusion.

Indeed, you could write a whole PhD on how damaging this is for the Democrats, how much, very ironically, this is report is now an indictment of them. Not merely because this is a win for Trump, a big one, but because of the virilant damage the Democrats have done to American journalism, American politics, and to the country as a whole by relentlessly, ruthlessly, and in complete despicable seflishness pushed this story.

Now, with no collusion to speak of, the hurt they have caused truly has been all for nothing. And they must answer for it.

The craziness that's unfolded in the media over the Mueller investigation comes in several flavours.

Firstly and formostly, the establishment Democratics, which is very much centrist and corporatist, has used Russiagate as a shield from ever having to evolve as a party.

Importantly not all elected etc Democrats, but many, many indeed.

They implied and often said that the only main reason they lost was because of Russia, so if US elections are protected in the future, the Democrats won't lose again - that in fact people want their corporatist BS platforms.

They have tried to bash Trump with being a traitor, a Russian puppet, a stooge of Putin who for this can't be trusted, and have tried to base their whole post-2016 strategy on beating him on Russia alone.

They don't want to beat Trump in the way that is guaranteed to work - by running on a bold, exciting, actual-people-helping populist, leftist platform. Like Bernie Sanders did in 2016 and is again in 2020.

No, that would go against the will of their all mighty donors. Anything but leftist reform.

So, they went with the the one thing they had that they thought could beat Trump without real policy reform. It didn't work, by the way - people in America had just as low an opinion after 2016 as before, they thought the Russia stuff was bad if it were true, but most US politicians are corrupt, so it's no different. They cared about stopping their families from starving, or going bankrupt from medical bills and student loans, and not sending their kids and neighbours off to die in an oil war.

The Democrats forced Russiagate on us all for nothing.

They slowed down the evolution of the Democratic Party and US politics as a whole by finding a roadblock to stifle debate with.

They formed insane tangent conspiracy theories that second guessed near every event in US internal politics as to whether it was a Russian false flag, or a Russian ordered seret manoeuvre, or whether the US president was a Russian operative.

They urged Trump to move to the right on foreign policy and push toward war on issues, so to prove he could stand up to Putin.

They smeared countless leftist candidates and supporters as Russian agents, Russian bots, Russian trolls. Russian this and Russian that. They defamed and lied about popular leftists people and movements as potential Russian-ops, so to help ensure the grip of their centrist, corporate-backed ideology on politics.

They made the media ignore every other pressing issue, like Flint Michigan still being without clean water, like Climate Change, the American healthcare crisis, the gun problem, the genocidal war in Yemen, and a tonne of other things.

They twisted, corrupted, decelerated, choked out and manipulated the political and media process in America for two years, all to 1) cover up their embarrassing, record breakingly shocking defeat to Trump, and to 2) prevent the ideology behind that loss from dying away, and being replaced by something that would actually help the people.

All for claims that now have proved false.

They have proven Fake News.

This is one of the most fakiest of Fake News stories in America for the last ten years.
They have now supercharged Trump's shield from legitimate criticism that he has of just calling everything he doesn't like fake news, by actually propogating one of the worst pieces of fake news in our lifetime.

That's on the Democrats.

It's all on the people in the establishment who, like during the build up to the Iraq War, crushed, villified and alienated any dissenting voices that tried to call for and exercise logic, reason, a real examination of evidence, true justice.

And there should be enormous political and career consequences for these people.

Rachel Maddow hands down should be fired, first of all - banished immediately from the lands of T.V. punditry, and never again, until a very long and substantive quest for redemption, be allowed to influence politics and the media.

The media organsiations and other relentless pushers of the theory should also have their credibility and job offers stripped away. Maddow is the symbolic figure head of this cabal, but by far not the only player.

The Democratic Party deserves to have their chronometers cleaned by the Republicans in the press over the next few weeks. And the grand architects in the party of Russiagate and its effects should be ousted or seriously chastised.

And of course more.

Yet little of what should happen will.

Let's not also forget by the way that Trump may very well likely be guilty of other crimes - both before and after the election. There are plenty of states and districts lining up charges against him for things ranging from tax fraud to further investigation into possible obstruction of justice.

Or whether indeed he did things like laundered money for Russia before he was president, or has dealt them favours since being president because of his connections to them.

And the very important issue of Trump's impeachment.

All those credible lines of inquiry and action are damaged because of the effect that the big nothing burger of Russiagate is.

Trump said it was witch hunt, and whilst the merit of making sure there was no foreign interference in 2016 on its own might have been good, the way the Dems and some major parts of the left media pushed this made it a witch hunt.

They made Trump right.

There's so much more than can and should be said about Russiagate. Indeed, do check out our coming articles on the matter.

But it's a sad, sad day (including in the pathetically sad sense) for the Democrats to find out they were wrong all along, but more so for the American people to know that they were lied to by the Dems/leftish media, as to the certainty and severity of these Russiagate.

Let's just hope that politics and journalism can somewhat grow from this (though that's currently unlikely), and that we can start talking on the left about the issues.

That as the poison of this ordeal fades, progress somehow manages to take its place. 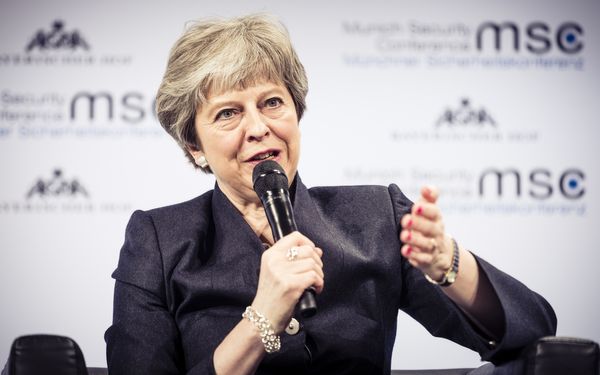 The prime minister says that she will resign if MPs back her deal on Brexit. Get the full analysis at Polerium. 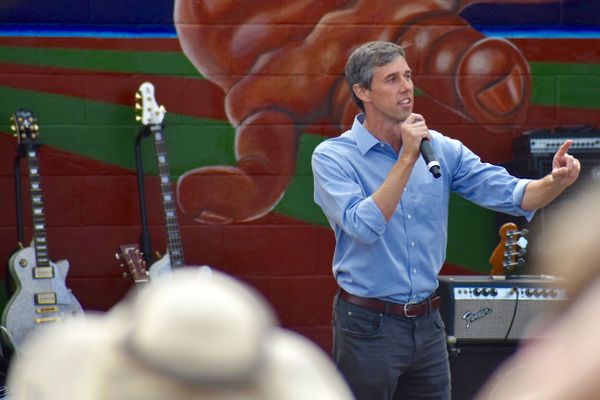 Beto O'Rourke has SMASHED the fundraising record - to the surprise of everyone on the left - with a huge $6.1 mill haul on his first day, according to his campaign. Find out the details, at Polerium.